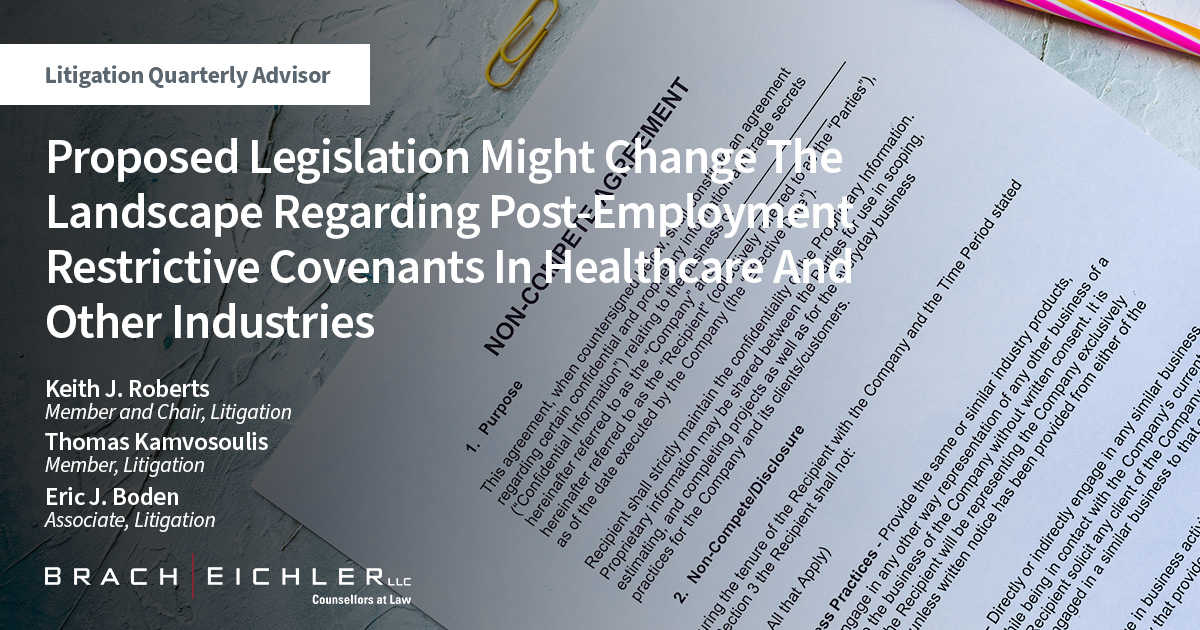 New Jersey courts have long enforced post-employment restrictive covenants, such as non-compete and non-solicitation agreements, when they “[i] protect the legitimate interests of the employer, [ii] impose no undue hardship on the employee, and [iii] [are] not adverse to the public interest.” Pierson v. Medical Centers PA, 183 N.J. 65, 69 (2005). While New Jersey’s rules concerning post-employment restrictive covenants are currently established by case-law, the State’s Legislature recently proposed Assembly Bill A3715 (the “Bill”), which would codify the above-referenced common law requirements. The Bill also builds on this standard by imposing additional and stricter restrictions on employers wishing to enforce non-compete agreements against former employees.

Stricter Geographic and Temporal Limitations:
For instance, the Bill imposes new restrictions on the geographic scope and duration of a restrictive covenant. The Bill would limit any restrictive covenant to a duration of one year – down from the two year period New Jersey courts often allowed in the past. The Bill would also restrict any geographic limitations to (i) the state of employment and (ii) the areas where the employee provided services or had a material presence.

While both of these changes are substantial, the proposed geographic limitation will likely have a greater impact. The major metropolitan areas of Philadelphia and New York City lie just over New Jersey’s state lines. Yet, the Bill would prohibit any employer from restricting a New Jersey employee from immediately obtaining subsequent employment at a competitor in either of these cities. Consequently, under the Bill, a New Jersey physician could obtain a position with a Philadelphia or New York City practice without violating a restrictive covenant.

Employers Must Pay Former Employees During the Restricted Period. In addition to limiting the duration of restrictive covenants to one year, the Bill disincentivizes lengthy covenants by requiring employers to continue paying most former, covenant-bound employees as if they were still working for the employer. Indeed, the Bill requires an employer seeking to enforce a restrictive covenant to pay a departing employee their full salary for

The Bill requires an employer to make these payments even if the employee commences employment elsewhere. However, employers are not required to continue paying salary and fringe benefits to employees who breach the restrictive covenant. Further, an employer is not required to make any salary or fringe benefit payments under the Bill to an employee who was terminated for “misconduct,” which is defined by the Bill to include “improper, intentional” conduct relating to the employee’s work.

Clients Can Follow a Departing Employee. Additionally, the Bill would allow an employee to continue servicing a former employer’s client so long as that employee did not directly solicit that client. This provision was likely included to protect the public’s ability to choose service providers. For example, it would allow a patient to continue seeking care from a physician even after the physician switched employers.

The Bill’s introduction in the Legislature underscores the scrutiny that the State is placing on restrictive covenants. Employers should review their post-employment restrictive covenant agreements to ensure that they comply with the current legal framework; however, they should be mindful that if the Bill is passed, they will not only face stricter limitations on the scope and duration of their restrictive covenants, but will also face more severe ramifications for violating the Bill’s provisions.