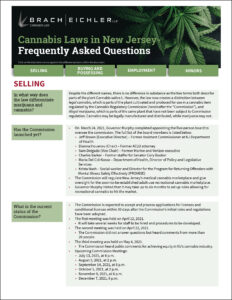 The rapidly developing Cannabis industry arising from laws permitting the use of medicinal cannabis, and, adult recreational use, brings with it a plethora of precedents yet to be set in the Garden State. This past April, the Cannabis Regulatory Commission met, kicking off the next steps in the long process of making legal cannabis sales a reality. Until the Commission adopts its rule and regulations, legal sales are on hold.

Brach Eichler receives numerous questions and inquiries regarding the current status of New Jersey cannabis sales, purchasing, consumption, and workplace regulations. To address your concerns, we have created Cannabis Laws in New Jersey – Frequently Asked Questions, a list of questions to keep you informed on the current state of affairs and policy developments in the cannabis industry.

Subscribe to our Cannabis Insights to receive the latest news and developments on the evolving New Jersey cannabis marketplace.

In what way does the law differentiate marijuana and cannabis?

Despite the different names, there is no difference in substance as the two terms both describe parts of the plant Cannabis sativa L. However, the law now creates a distinction between legal cannabis, which is parts of the plant cultivated and produced for use in a cannabis item regulated by the Cannabis Regulatory Commission (hereinafter the “Commission”), and illegal marijuana, which is parts of the same plant that have not been subject to Commission regulation. Cannabis may be legally manufactured and distributed, while marijuana may not.

Has the Commission launched yet?

What is the current status of the Commission?

What kind of licenses will the Commission issue once the rules and regulations have been adopted?

When will cannabis license applications be available?

The Commission will begin accepting and processing applications within 30 days after the initial rules and regulations have been adopted.

What are the tax differences between adult-use recreational cannabis and medical marijuana?

So, can I buy cannabis now in New Jersey?

Where can I legally purchase cannabis?

Is it legal to possess cannabis in New Jersey?

Yes. In November of 2020, the state constitution was amended to legalize the recreational use of marijuana for adults aged 21 and older. The new law removed criminal and civil penalties for possession of up to 6 oz for adults 21 and over. The constitutional amendment took effect on January 1, 2021.

How much cannabis can I legally possess?

Individual adults may legally possess up to 6 oz of marijuana, including any adulterants or dilutants, or up to 17 grams of hashish.

Hashish means the resin extracted from any part of the plant Cannabis sativa L. Under the new laws, marijuana and hashish are still defined as “controlled dangerous substance” but are largely decriminalized for non-distribution offenses. The laws eliminate existing prohibitions and create new, more lenient penalties for possessions and distribution that remain tiered based on weight. Individual adults may legally possess up to 17 grams of hashish.

How much can I legally buy from state-licensed dispensaries?

Each state-licensed cannabis dispensary will be able to sell up to 1 oz of cannabis per customer.

Can I give cannabis as a gift?

Yes. You can gift another adult 21 year of age or older up to 1 oz.

Can I get cannabis delivered to me?

Once dispensaries are open to the public, the state will also license delivery drivers to bring marijuana directly to customers.

Can I buy cannabis in a state where it is legally sold and bring it back to New Jersey?

No. Legally produced marijuana must stay within the state where it was grown. Marijuana remains illegal at the federal level, and so does bringing it over state lines. Furthermore, it would be illegal to get cannabis shipped from out of state.

Can visitors from other states buy cannabis in New Jersey and take it back with them?

No. Visitors who buy in New Jersey cannot legally take it back home, due to federal prohibition that blocks interstate travel with marijuana. Legal cannabis purchased in New Jersey should also be consumed in New Jersey.

Can you drive with marijuana?

Driving under the influence of marijuana is illegal. However, possessing up to 6 oz of marijuana or up to 17 grams of hashish in a car will fall under the same rules as a possession as long as the driver is not consuming it.

Can police officers search my car based on the smell of cannabis?

No. The odor of cannabis, either burnt or raw, by itself no longer constitutes “reasonable suspicion” to justify a continued stop of an individual under the age of 21, nor does it provide “probable cause” to search the person’s personal property or vehicle.

Where can you smoke cannabis?

Where is cannabis prohibited?

Can I grow cannabis plants at home in New Jersey?

What are the major differences between adult-use recreational cannabis and medical marijuana?

Can an employer fire an employee for cannabis consumption?

Can an employer require an employee to undergo a drug test?

What happens when my child under 21 gets caught for either possessing or consuming marijuana?

Can my child under 21 get arrested for refusing to provide identifying information for the written warning or putting the marijuana in their pocket or concealing it in some way?