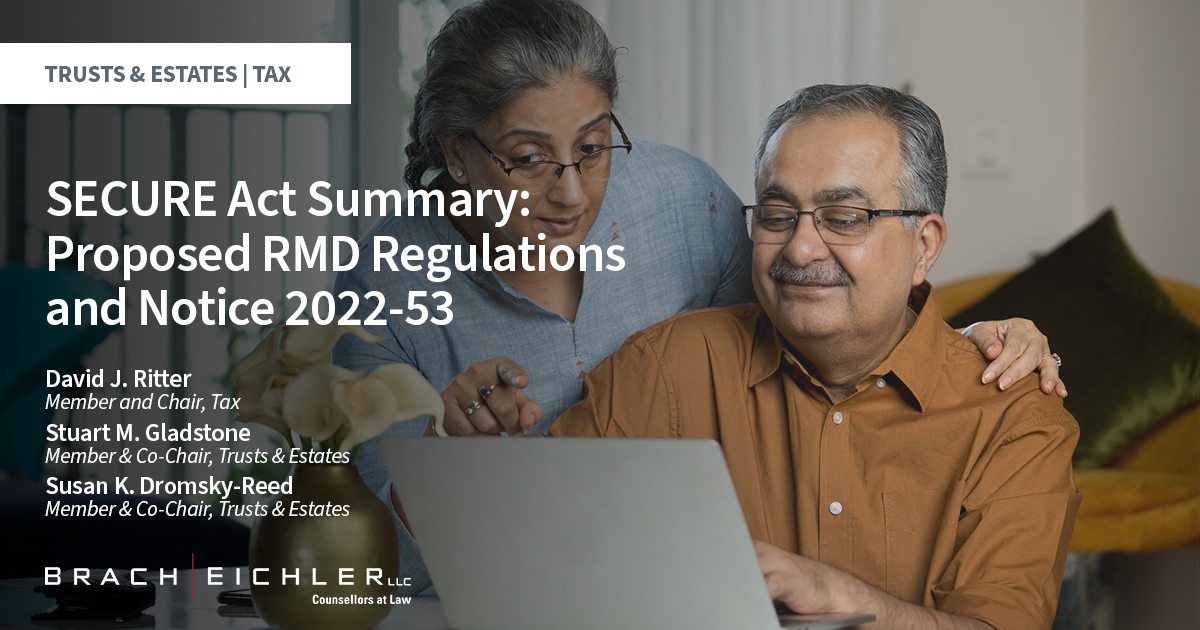 Prior to the Setting Every Community Up for Retirement Enhancement Act of 2019 (SECURE Act), the preferred payout for an inherited IRA was the “stretch IRA” which stretched the post-death annual distributions over the life expectancy of the new IRA beneficiary. The IRA could continue to grow tax-deferred often for many decades after the owner’s death. The default option for non-individuals was the 5-year payout which required the account balance to be distributed out completely by the end of the fifth year.

The SECURE Act retained the default payout period of five years but replaced the “stretch” for designated beneficiaries (individuals designated as the beneficiary under the plan) with a 10-year rule that requires the IRA to be distributed out completely by the end of the calendar year that included the tenth anniversary of the owner’s death.  As discussed at the end, some commentator’s believed that the 10-year rule did not require annual distributions (regardless if the owner died PRE-RMD or POST-RMD), so long as the full amount was distributed by the end of the tenth year. The new 10- year rule does not apply to the following beneficiaries (known as “eligible designated beneficiaries”): the IRS owner’s surviving spouse, the owner’s children while they are minors, certain individuals who are chronically ill or disabled, and any person who is not more than ten years younger than the IRS owner.

On February 24, 2022, the Internal Revenue Service published Notice of Proposed Rulemaking, REG-105954-20, 87FR10504, proposing income tax regulations to govern required minimum distributions (RMDs) for IRAs and employer plans with accounts and benefits effective for plan years beginning after January 1, 2022. The proposed regulations align with the amendments made by the SECURE Act and  include clarifications and important changes.

Generally, tax-deferred retirement accounts are subject to RMDs except for Roth IRAs held by the owner. RMD regulations depend on whether the RMD applies to the owner/participant or the beneficiary. The following are the four proposed RMD regulations impacting beneficiaries.

Note that retirement plans may provide for either of these options. However, if the plan defaults to the 10-year rule, then a beneficiary must elect for life expectancy by rolling over the inherited account to a beneficiary IRA that provides for such an option.  The rollover must be directed by December 31st of the year following the year that the retirement account owner died.

On October 7, 2022 the IRS issued Notice 2022-53 which stated that the proposed regulations, when final, will not apply earlier than the 2023 calendar year and issued guidance and relief for heirs or beneficiaries of individuals who died in 2020 and did not take an RMD in 2021 and were unsure as of whether they would be required take an RMD in 2022.

During the comment period, the IRS received comments that commentators believed that regardless of when an employee died, the 10-year rule would operate like the 5-year rule, under which there would not be any RMD due for a calendar year until the last year of the five or ten year period following the death of the employee and that the IRS should provide transition relief for failure to take distributions that are RMDs due in 2021 or 2022.

In response, the IRS in Notice 2022-53 Section IV Guidance for Certain RMDs for 2021 and 2022 B Guidance for certain taxpayers who did not take a specified RMD the IRS responded by granting relief for the years 2021 and 2022 (note no distribution was required for 2020 by statute) “… To the extent a taxpayer did not take a specified RMD, the IRCS will not assert that an excise tax is due under IRC § 4974. If a taxpayer has already paid an excise tax for a missed RMD in 2021 that constitutes a specified RMD, that taxpayer may request a refund of that excise tax.

Notice 2022-53 will allow taxpayers/beneficiaries who have not taken the RMD due to a death of the employee during 2020-2022 where the RMD had begun prior to the death, to wait until 2023 to begin the RMD. Several commentators have indicated that the IRS will not require make-up distributions for the years 2021 and 2022. A likely scenario will be that the distribution will be based on the 12/21/2022 fair market value of the account using the divisor applicable to the beneficiary commencing in the year 2023.