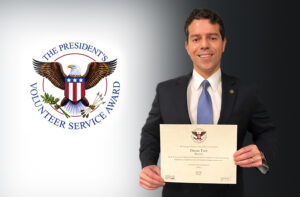 David L. Tsin, an associate in our Business Transactions & Financial Services Practice, was recently awarded the President’s Volunteer Service Award, a recognition given to individuals who achieve a minimum of 100 volunteer hours during the previous year.

David has been a long-time volunteer with New York Cares, a non-profit organization that “meets pressing community needs by mobilizing caring New Yorkers in volunteer services.”  He began volunteering with the organization after September 11, 2001 and has remained involved since then.  During 2018, David participated in more than 30 volunteer projects with New York Cares, which included, among other things, assisting at food pantries, distributing meals to homebound older adults, teaching basic computer skills, and even taking visually impaired passengers for a ride around Central Park on a tandem bicycle.

David received a certificate and a congratulatory letter signed by President Trump on April 23rd at a ceremony in New York City.  Well done!