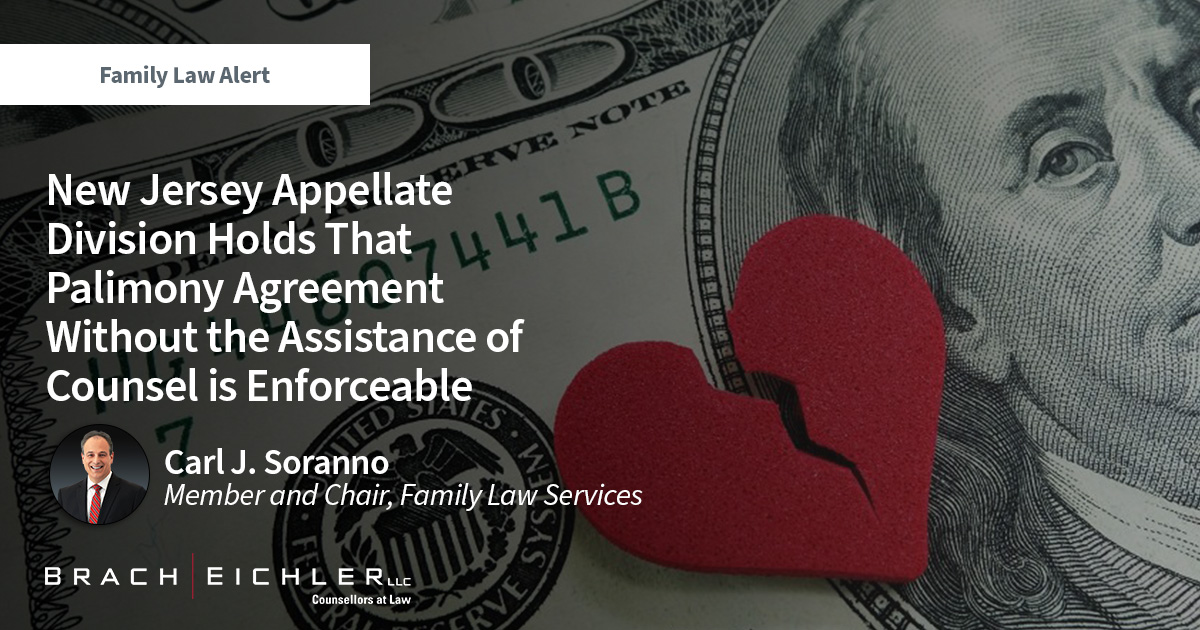 The enforceability of palimony agreements is a complex issue and opinions on the subject have evolved over the past decade.  In response to the precedential Appellate Division decision in Primmer v. Harrison, issued on May 6, 2022, Brach Eichler’s Family Law department offers the following analysis of this recent decision and its implications.

Palimony agreements determine support arrangements when unmarried couples separate.  They can be subject to scrutiny and debate as they are frequently verbal agreements or poorly drafted written ones.  In fact, in 2010 the New Jersey legislature amended the Statute of Frauds intending to invalidate oral palimony agreements. The purpose was to ensure that agreements were reduced to writing and that the participants entered into agreements with the independent advice of counsel.

However, in the years since the statute was amended the statutory intent has been eroded by the courts. In Maeker v. Ross, September 25, 2014, the New Jersey Supreme Court did not give the amendment retroactive application. It ruled that oral agreements created prior to the statutory amendments were not extinguished by the new law. On March 8, 2022, the New Jersey Supreme Court revisited the subject of palimony agreements in Moynihan v. Lynch.  In that case, a written palimony agreement existed but the parties did not have independent counsel. The Court reviewed the portion of the statute that requires parties to secure counsel and it found the requirement unconstitutional due to the prohibition on impairing contracts. Impairing contracts is when a law is enacted that will lessen the value or decrease the enforceability of a contract or an agreement. In this case, the New Jersey Supreme Court reversed the Appellate Division, holding that the New Jersey Constitution limits the power of the State to control individual decision-making in certain fundamental areas concerning a person’s life and livelihood.  Further, it ruled that exclusively requiring counsel for palimony contracts (as opposed to any others) interferes with an individual’s right of autonomy. In Primmer v. Harrison, the Appellate Division found that the holding in Moynihan should be given retroactive effect.  In Primmer, the parties did reach a written agreement with the help of an attorney who was the defendant’s long-time friend.  There was performance under the agreement for six years but the defendant stopped paying, contending that because independent counsel was not secured for each party the agreement was void.  The Appellate Division did not agree and retroactively applied the holding in Moynihan, specifically finding that counsel was not required in the creation of a palimony agreement. The Court also noted that the defendant attempted to use as a sword the very language in the statute that the legislature envisioned as a shield. This author still recommends that parties carefully draft palimony agreements and reduce them to writing.  Although not required, parties should retain their own counsel to advise and review such agreements before executing them.