Pay-if-Paid Clauses in a Construction Contract: Has the New Jersey Appellate Court Recently Deemed Them Enforceable? 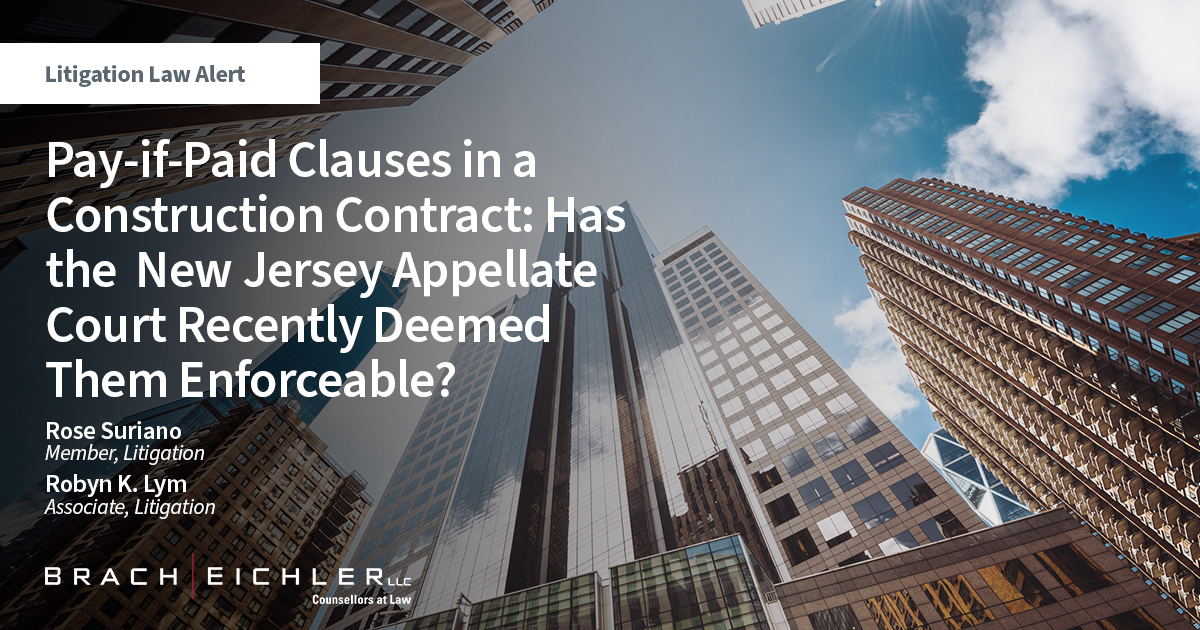 In New Jersey, prior to the recent New Jersey Appellate Division decision in JPC Merger Sub LLC v. Tricon Enterprises, Inc., 2022 WL 17479912 (App. Div. Dec. 7, 2022), the courts had never addressed whether a pay-if-paid clause is enforceable. In JPC Merger Sub, LLC, Tricon, the general contractor, sent a purchase order to JPC, the subcontractor, for work on a public project for Union County. The purchase order had  pay-if-paid language in it, stating that “[JPC] understands and agrees that Tricon’s obligation to make any payment to Vendor is subject to, and shall not exist unless and until, Tricon’s receipt of payment on account of Vendor’s [w]ork from the Owner” and that “the occurrence and satisfaction of which shall be a condition precedent to Tricon’s duty to remit payment.” The pay-if-paid provision in the purchase order also stated that Tricon would pay within 14-days of receiving payment from the County.

JPC’s president made several handwritten changes to the purchase order, including reducing the time for Tricon to pay after receiving payment from the County from 14 days to 7 days, but the pay-if-paid language remained in the purchase order which was signed by both parties.

JPC began its scope of work. Tricon paid the first two invoices, but refused to pay the remaining invoices because the County did not pay Tricon for JPC’s work due to a dispute between Tricon and the County as to who was to make arrangements with the utility company to allow work to proceed.

Based on the Appellate Division’s decision in JPC Merger Sub, there is now greater clarity in New Jersey that if a pay-if-paid clause is to be enforced, it must be clear and unambiguous and the general contractor must not be responsible for the owner’s failure to make payment. Therefore, general contractors can now rely on pay-if-paid clauses to a greater extent. Subcontractors must carefully review the payment clauses of their subcontracts to determine if payment to the subcontractor is conditioned on payment to the general contractor, because based on the JPC Merger Sub LLC v. Tricon Enterprises, Inc., courts will enforce these clauses.

Even the most sophisticated contractors need assistance navigating through the changes in contract language. Should you have any questions about this decision and revisions that should be made to your contracts, feel free to contact: