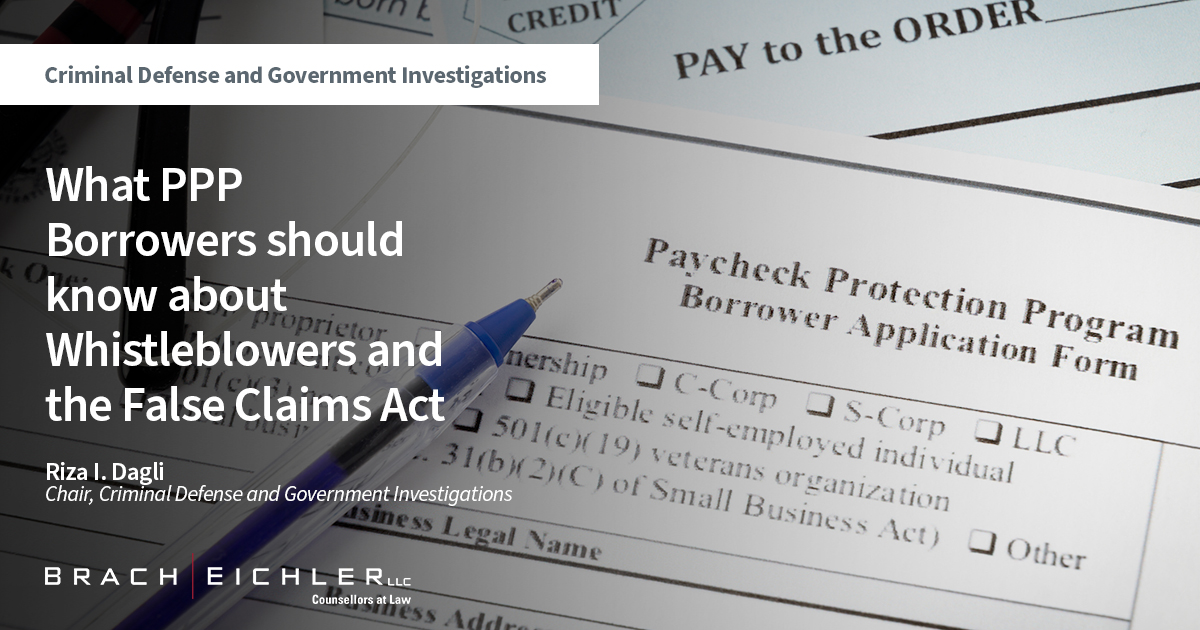 For the vast majority of Paycheck Protection Program (PPP) borrowers, the PPP program was a crucial and beneficial program during the economic uncertainty of a global pandemic, and a way to keep their legitimate business afloat and their legitimate employees paid.  Notwithstanding its benefits, the sheer size of the program and the speed at which the loans were processed created an opportunity for individuals to exploit those benefits.  Over $2 trillion in federal funds were disbursed through the PPP, COVID-19 EIDL, and Pandemic Unemployment Insurance (PUI) programs.  It is no mere conjecture that a portion of this amount was based on fraud.  By some estimates, 15% of the PPP loans were fraudulent. (https://www.nytimes.com/2021/08/17/business/ppp-fraud-covid.html)

According to the June 13, 2022, Congressional Subcommittee on the Coronavirus Crisis (link), over $10 Billion in (PPP) and COVID19 Economic Injury Disaster Loan (COVID-19 EIDL) funds were returned to the United States government as a result of investigations.  Additionally, there have been at least 1,200 criminal arrests, 950 arrests, and more than 450 convictions.  These criminal cases typically involve egregious examples of borrowers submitting loan applications for sham companies or fictitious employees.  For example, eight defendants were recently charged in Pennsylvania with conspiring to obtain more than $7 million loans.  The defendants, many of which did not even own a business, purchased a dormant “shelf” company from the ring-leader, who then applied for loans on behalf of the companies for paying non-existent employees.  (link https://www.justice.gov/opa/pr/eight-charged-7-million-loan-fraud-scheme)  Similarly, prosecutors charged a Florida resident for obtaining $1.7M in PPP loans for his business by representing he had over $500,000 in monthly wages.  He paid zero actual wages.

All federal agencies with oversight of PPP investigations have increased their budgets for investigations and enforcement.  In his State of the Union address, President Biden announced that he would appoint a Chief Prosecutor for Covid relief investigations and prosecutions.  Like other cases involving defrauding the United States Government, these investigators use resources like data mining, algorithms, and referrals from banks and lenders or suspicious activity.

However, another source of information that is increasingly relevant to PPP investigators is the relator, or “whistleblower”, bringing a Federal False Claims Act case.  The False Claims Act was enacted during the Civil Ware to combat fraud by contractors supplying the US Army.  It has been widely used by prosecutors to counter government contract fraud, and Medicare and Medicaid fraud.  An important incentive within the law is the ability for an individual (referred to as a “relator”), who has knowledge of the fraud, to file a lawsuit on behalf the US Government.  If the case is successful, whether through a United States Attorney litigating or settling the case, or the relator litigating the case, the relator shares in the Government’s recovery.  These cases are sometimes windfalls for relators, resulting in between 15% and 30% of the recovery.  In 2019, a federal court awarded the relator 28.5% of the $108M  settlement .(https://casetext.com/case/united-states-ex-rel-bibby-v-wells-fargo-bank-na-7).  It is no wonder that relators and relator attorneys have begun emerging in connection with PPP loans, and federal lawyers have been using the FCA, which has significant penalty provisions including treble damages, to litigate PPP loans.  For a FCA to be successful, the fraud must be against the federal government, not a private lender.  Accordingly, loans that were not forgiven by the Government, would only result in an FCA recovery of the processing fee that the Small Business Administration pays lenders; between 1% and 5%, for the loan.  If the loan was forgiven and paid by the Government, however, that amount could be subject to the FCA.

Even if the FCA amount is limited to the processing fee, FCA cases have been brought and settled through 2021 and 2022.  Often, the relators in these cases are former or current employees who allege they did not participate in the fraud (the FCA requires the relator to have “clean hands”), and, in some cases, they warned their superiors of the misconduct but were ignored. In addition to the FCA claims, these individuals will also bring wrongful termination claims and seek compensation beyond the FCA recovery.

We don’t yet know how extensive the FCA is being used, because a key feature of FCA claims is that they are brought “under seal”.  In other words, the complaint and investigation are secret until there is a settlement, or the case is “unsealed” by the Court.  So, there are likely significant PPP loan FCA cases in development that will come to light over the course of the next year.